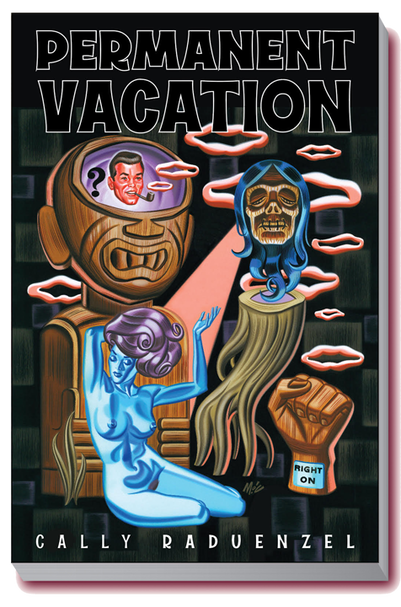 Lucy Zwick was living the dream! A breezy island getaway to relax and take a break from the daily grind. It all began so good. Staying on a yacht and her music career resurrected! Then her brother is kidnapped by drug smugglers. Now she has to depend on a cast of colorful locals to get him back. This was supposed to be the great escape but will Lucy and her brother end up as shark bait?

When she looked out the lodge window at the impending autumn of Fossil Creek, with its early morning mist off the lake and a lonely fishing boat floating in the distance, she realized how comforting her adopted small town had become. This urban champion from Chicago had settled into a quaint small-town lifestyle and for a while it was her oasis from the world.
Now, with the sudden death of her dad, she was feeling an old itch. She was restless. She needed to see her brother and get out of her life for a bit.
Her phone had been buzzing up a storm even though she’d put it on silent. It was work. It was always work.
Things at the hair salon she owned, things that normally wouldn’t annoy her, now set her off to the point where she was ready to snap. This wasn’t Lucy—Lucy was always someone who laughed easily and was heavy on the charm, “a hardworking Norwegian,” her grandpa used to say with a pat on her shoulder, as he ruffled her curly blond hair. But lately it was all tension, curse words, and annoyances. She attempted to resume redecorating her home “office.”
Amanda, her partner, had examined all the unpacked boxes. “It’s gonna look like a Tiki Bar threw up in here,” she commented comically as she stood shaking her head, hands on her hips, in a pair of cargo shorts and Montreal Canadiens hockey jersey, before calling it a night.
“World traveler, exotica . . . that’s my vibe,” Lucy theatrically corrected Amanda. On second thought . . . it was heavy on the Hawaiian bar wear and rattan furniture. She smiled as she gazed on the huge pièce de résistance of her mounting collection, a chandelier made of taxidermied puffer fish that she had bought it on auction back in Chicago at an estate sale. It somehow felt extra exotic in the wiles of Canada!
When Lucy had acquired this former Canadian lodge, it had been neglected and in rough shape. The “Great Room,” as she liked to call it, was formerly part of a front desk check-in sitting area with a huge picture window looking out onto Lac De Lune. Cracked linoleum and a wobbly wood-paneled check-in desk that smelled like must and moth balls had been torn out and was now a cozy sitting area filled with a mixture of Tommy Bahama’s Island Estate furniture, which looked more Kenyan safari and less hunting shack. The gold stained shag carpeting with cigarette burns and mystery goo matting it down by the seating area had been removed and replaced with the thick plush animal skins found in storage from years before, when the place had truly been a hunting lodge. All this rustic decorating added to the integrity of the lodge’s outdoorsy surroundings without looking so dumpy and forlorn. Lucy was a reader, so lots of dark-wood bookcases complemented the lodge’s expansive walls. She even had a shrunken head—that she’d picked up at a “Cabinet of Curiosities”  collectors’ event on a wharf in Seattle. This was her freaky little oasis from the world and she loved it!
“Lucy, your phone is ringing again,” Amanda called out from the bathroom. It was late and she was sick of talking to work and answering the never-ending texts.
Amanda added, “Don’t forget I’m helping Bob out at the store tomorrow.”
“OK,” she yelled back. “I’m just gonna load a few more things onto the shelves and I’ll meet you in the hot tub!”
Lucy flipped on some West Coast jazz and began cleaning up her mess of boxes and packing material. Stan Getz and Chico Hamilton always relaxed her and helped her wind down.
Quickly she ran and got her phone, texted her response, and plunked down in the middle of her towers of books. “I need to get the hell out of here.”
It was a year or more since her last vacation and she was crispy. Her life had been a whirlwind of massive changes, mostly for the good, but modern life had snuck into the out-of-the-way little town. Taking over the hair salon and flipping it into a “destination” was a total surprise, but the escape that brought her from Chicago to Fossil Creek, Canada, now made her want to feel the island breeze on her face and throw her phone overboard.
Amanda kept reminding her that all she had to do was book a flight to her brother’s in Oahu and she could exhale and relax, but she hadn’t pulled the trigger . . . maybe it was time.

Lucy and Amanda had met auspiciously almost two years before. Amanda was a reclusive “mountain woman” type living on Lucy’s recently deceased uncle’s property in a cottage that was now her writing studio. Amanda had been the caretaker for Lucy’s uncle’s property. Lucy at first thought she was kind of an asshole, with her snappy comments and flippant comebacks, but after their initial rough start, Cupid’s arrow had hit swiftly and Amanda and Lucy had been inseparable ever since . . . sort of.
One thing about two strong-willed women is . . . they are both strong-willed women, and both Lucy and Amanda had their own lives. But since their marriage in Hyannis, Massachusetts, they’d both bloomed into the people they both desired to be: Lucy becoming a successful businesswoman with her hair salon and band and Amanda becoming more social and part of the community she loved so much, while still editing coffee-table books for a company in Montreal.
Amanda’s latest “side hustle” had become helping Bob, their mutual friend, run his ever-popular general store and restore old motorcycles.
Fossil Creek, their remote winter retreat town, had become a tourist hot spot ever since Rick Steves, a famous travel author, had blogged about their “enchanted village hidden in plain sight” right outside of Montreal. Now on any given day the big stuffed moose in Bob’s storefront window was photographed more than a supermodel in Milan.
So with all this good fortune why was Lucy feeling so irritable and discontent?
Her phone glowed yet again with an incoming text. “Cops are at the salon, silent alarm went off—please advise.” It was 11:30 at night and she was in sweats looking like a slob. She texted back, “Well, did anyone break in?”
“Yes,” was all her manager could text back. So now she was on the way over to check the damage.
She would call her brother tomorrow and book the flight. It was time to go rogue. She was ready for a little aloha.
Cally's World