The thing Lucy really liked about Oahu is how little it seemed to change. The airport, the swaying palm tree’s, Kahuku Superette for Poke, La Mariana Sailing Club in Honolulu for pupus and cocktails,  and to watch the yacht’s come in and out among the thick green enchanted fronds.  The locals are chipper …Ted’s carrot cake, always moist and Kalua Pig Nachos, smokey, dripping with hot cheese and spice. The concrete high rises that still had that 1970’s vibe, shared their space with newer architecture, cell phones, congestion.  Honolulu restaurants may have evolved into the upscale mainstream tapestry but much of the aloha soul held on to it’s roots with a seemingly breezy vice grip, you just had to venture outside of the big city to feel Oahu’s own island culture. Real Hawaiian’s weren’t hanging out in Waikiki, just ask Willie K- a singing musical treasure.

Before her trip to visit her brother in Oahu she’d been loading up on all Hawaiian kitsch. Watching Hawaii 5-0 classic and comparing it to the more recent remake Hawaii 5-0  (she loved both).  Then there was her favorite retro TV show Magnum P.I., she knew the streets of Kalanianaole HWY. where the fictional , “Robin’s Nest”  island retreat of Robin Masters was -still there but owned by someone new who was rehabbing the Waimanalo Beach property.  The restaurants like Crouching Lion on the North Shore, close to her brother that over looked the ocean and had a great group of locals who frequented the mountain side restaurant for late night eats. They mostly maintained the integrity of who they had always been…would it be the same on this visit Lucy wondered, she hoped… the fast changes of the world and her life made her wonder.

Her brother always liked to pick Lucy up at the airport but her sister in law,  Jenny’s car had punked out on Pearl City highway, not the best area and Neil had to pick her up first.
Lucy took a cab to the dock where her boat was waiting. Her cab driver wasn’t much of a talker but they stopped by a Starbucks and after a iced caramel macchiato, her treat, he helped her with her bags to the boat.

Lucy got settled in her floating hotel room. The yacht was anything but palatial, it felt like a kid brothers bedroom with neon beer signs in the tiny windows over the bar kitchen galley.  A calendar of sexy pin up babes on the mini fridge and multi colored nautical floating balls with little lights inside them illuminated the small cabin space that included her combo bed/couch next to the multi use kitchen table/wet bar/ desk. It was like an interior of a tiny RV. But when she climbed outside and stepped onto bow of the boat, it was a breath taking island getaway. The lapping of the waves rocked the yacht ever so gently and her new Top Sider boat shoes made her feel secure against the seemingly slippery fiberglass boat floor.

She sat down on one of the sturdy little deck chair seats and took in the view from her slip. Most of the neighboring boats were empty and with the sunsetting many of the yachting types had made their way to the marina for cocktails and pupu’s, also known as appetizers. The breeze was sweet and and reassuring, like nothing wrong could possibly be wrong in the world. No struggle, hunger or strife could wreck this moment of bliss. Until her cell phones text vibration scarred the shit out of her.
Heart pounding, she laughed, embarrassed  and looked around nervously to see if anyone caught her freakout. The docks seemed eerily empty.
The green cube on her iPhone showed two text’s…one from her long lost music agent Guy. He had been relatively M.I.A since the music recording contract had fallen through a year ago. He tried to get her some gigs but the money wasn’t great for unknown acts who didn’t play covers (cover songs are popular songs recorded by famous bands). And it was a lot  of work for she and her band who already had day jobs and families to practice weekly.
The text from Guy simply said CALL ME in capitals. The second text said, NOW. But with the time difference being 5 hours, she just texted back, GOOD TO HEAR FROM YOU, JUST ARRIVED IN HONOLULU, WILL CALL YOU IN TWO WEEKS WHEN I GET BACK.
Then she pressed send and cracked open a Diet Pepsi…feeling the waves gently rock her back and fourth, the orange and gold sun sinking against the fading blue horizon was like an electric tie dye. 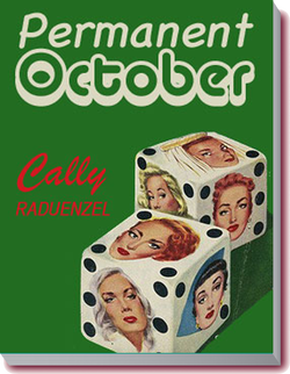 Permanent October is a novel with mystery, romance, intrigue and adventure. City girl Lucy Zwick inherits a winter retreat from her wealthy dead Uncle but the twist is she has to up end her city life and move to tiny town Fossil Creek (fictional city outside of Montreal). She is a lesbian and a hair dresser who has always sang and written books so she is very wary of this move. With the help and support of family and friends she makes the move and her life is forever transformed for the better. Family drama, romance and a new direction for her music take hold. Its a modern twist of On The Road meets The World According to Garp, using humor and adventure to lead the way into a, life less ordinary with an exciting cast of oddball characters and meaningful exchanges. Want to read a book you can't put down...here it is!
Cally's World